By: Donna Chaffins
In: Fun 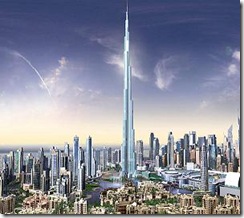 Tonight on 60 Minutes, Steve Kroft reports on Dubai's success as a business and tourist destination.

Where is Dubai, you ask?  Dubai is situated on the Persian Gulf coast of the United Arab Emirates.  Dubai lies directly within the Arabian Desert.  Dubai can either refer to an emirate (one of seven) in the United Arab Emirates (UAE) in the eastern Arabian Peninsula, or that emirate's main city, sometimes called "Dubai city" to distinguish it from the emirate.

Now you know where Dubai is, why would you want to vacation there?  Well they have several historical sites of interest, such as one of the many watchtowers that once guarded the old city, built in 1870, the restored Burj Nahar in Its picturesque gardens in Deira is popular with photographers.

Also, Dubai Internet City – An information-technology park created as a free economic zone by the Government of Dubai, Major companies such as Microsoft, IBM, Nokia and UAE based companies such as i-Make and Acette have established operations at the DIC, attracted by taxation and custom benefits guaranteed by law for the next 50 years.

Dubai's latest (or tallest) claim to fame is that it can boast to having the world's largest building the Burj Dubai, standing at  629 meters (2,063.6 ft.), is easily the tallest man-made structure.  It is referred to as an 'Urban Environment'.  Besides residential suites it has a cigar club, restaurants, library, four swimming pools and much more.  Talk about luxurious living… Check out their official Burj Dubai web site.  The Burj Dubai is set to open in 2009.

While there you can take in many tours and a desert safari, which they say no vacation to Dubai would be complete without a trip into the desert.  You can go to DubaiTourism.com and see just what Dubai has to offer as a vacation destination.

If you are a world renown traveler or looking for something different for your next vacation…Dubai does seem like a very nice option.

Tune in to 60 Minutes tonight at 7 p.m on the CBS network and see for yourself.  Let us know whether you would vacation in Dubai.  Or if you have ever been to Dubai – share your experience with us.  Hope to hear from you.