By: Donna Chaffins
In: Announcements, Family and Health, In The News, TV 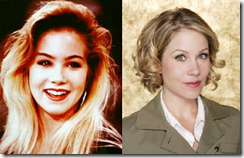 Actress Christina Applegate has reportedly been diagnosed with an early form of breast cancer and is currently undergoing treatment.

"Christina Applegate was diagnosed with an early form of breast cancer. Benefiting from early detection through a doctor ordered MRI, the cancer is not life threatening. Christina is following the recommended treatment of her doctors and will have a full recovery."

Most recently Christina can be seen on her sitcom ABC's Samantha Who?, which she has earned a Golden Globe and Emmy nomination for her role.

Applegate began her career as Kelly Bundy on Married … with Children on the Fox network in 1987.  On the raunchy comedy, that lasted 11 seasons, she played a sexy, yet ditzy teenager.

In 2003 she played a guest role as Jennifer Aniston's sister on Friends, where Applegate won an Emmy for Outstanding Guest Actress in a Comedy Series.  Read about Christina Applegate at Wikipedia.

Applegate is among the celebrities scheduled to appear on the Stand Up To Cancer a television special to be aired simultaneously on ABC, CBS and NBC on September 5, 2008 to raise funds for cancer research.

I am, as well as many others, sending good thoughts and well wishes to you Christina.