By: Donna Chaffins
In: Education, In The News 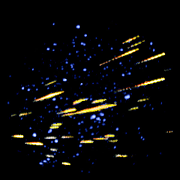 The 'Perseid Meteor Shower' will be at its peak in a clear, dark sky late night August 12 to the wee morning hours of August 13, 2008.  You may be able to see up to 80 shooting stars or meteors each hour.

Meteor showers are the result of small particles entering the Earth's atmosphere at high speeds.  The 'Perseid' shower comes from the tail of Comet Swift-Tuttle, last time it was in the vicinity of Earth was in 1992.

According to Science News:

To see the meteor shower, look towards the north-eastern sky from 2200 BST onwards. In clear weather and away from the light pollution of major cities, it should be possible to see a meteor at least every few minutes, with most appearing as brief streaks of light. The waxing gibbous Moon will be in the evening sky but will have set by 0130 BST on the morning of the maximum so its light will not interfere with the view after that time.

Sadly, I will probably miss the Perseid Meteor Shower this year.  My son's first day of school is tomorrow and it will be hard enough getting up at 5:30 a.m. as it is.  And since the best time to watch the showers here is between 1 – 4 a.m., I think I'll have to pass.

SAVE & ACCEPT
Go to mobile version