Screenshot On A Mac – How to Do It The Easy Way

By: Greg Chaffins
In: His Gadgets and Tech

Do you use a Mac and want to know how to quickly and easily take a screenshot? Well, you would not believe how simple it has been made, thanks to the advanced operating system each Mac now ships with from the Apple factory.

Personally, I would not like to use a computer on a regular basis that didn’t have some way of taking a screenshot. Apple recognizes this, which is probably why they include the functionality built into the OS. What’s more, there is more than one way to make it happen. 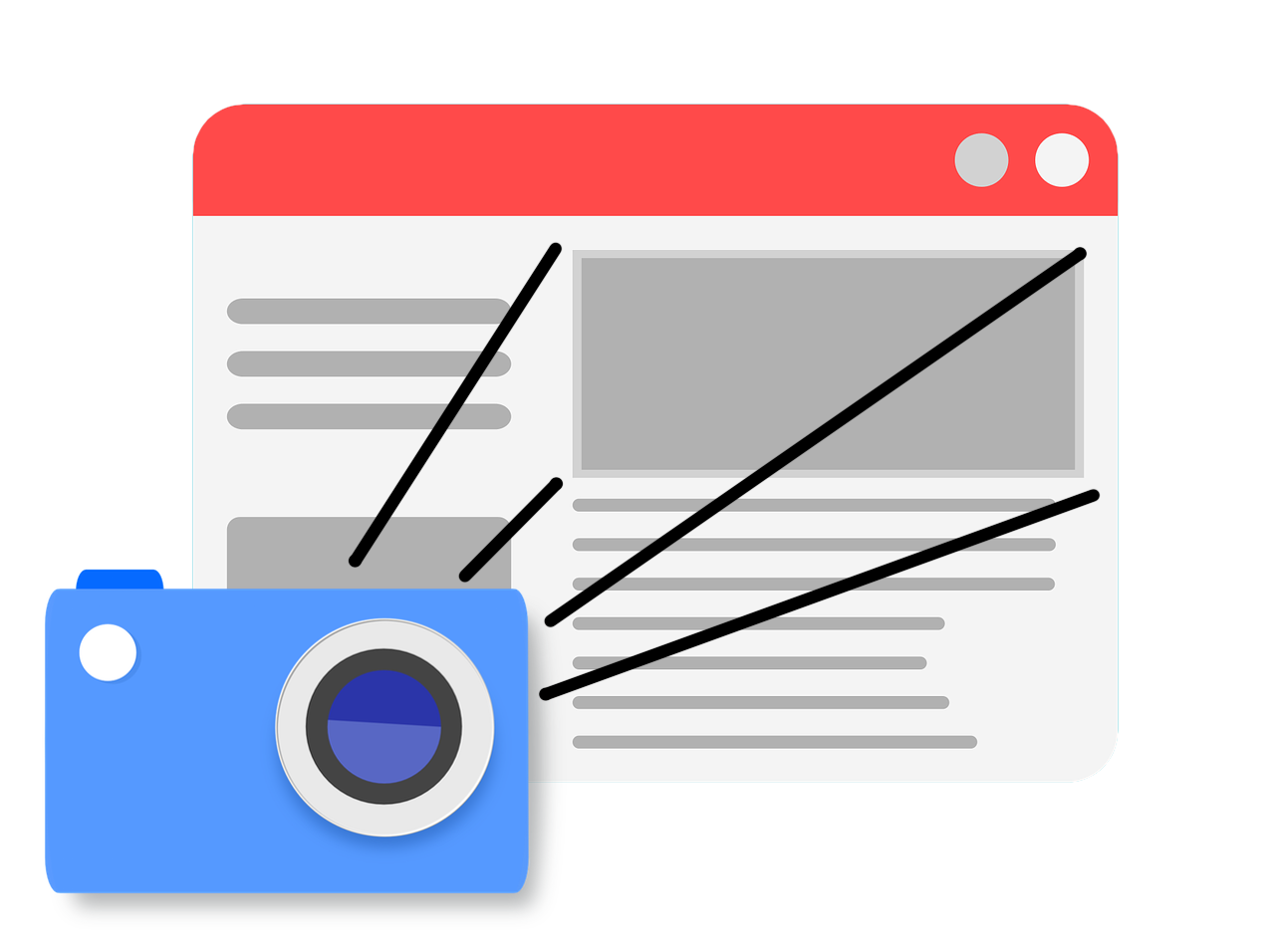 One of the most popular ways beginners like to take a screenshot on a Mac is to use Preview. While this is certainly simple enough, sometimes it will present itself a bit cumbersome in the process, especially with having to launch the app first – not the most convenient when you want to grab something quick. But it is user-friendly, so let’s take a look at it first.

The first thing you will need to do is to launch preview. Chances are you have it already in your dock – it looks like a couple of photos with a magnifying loupe.

If you can find it, go ahead and launch it. If not, no problem – just launch it using spotlight. To do that, hit the command key and the spacebar at the same time. You should find Spotlight pop up in the center of the screen. Now just type in “Preview” and hit enter when the name appears – it should appear fairly quick, saving you keystrokes. 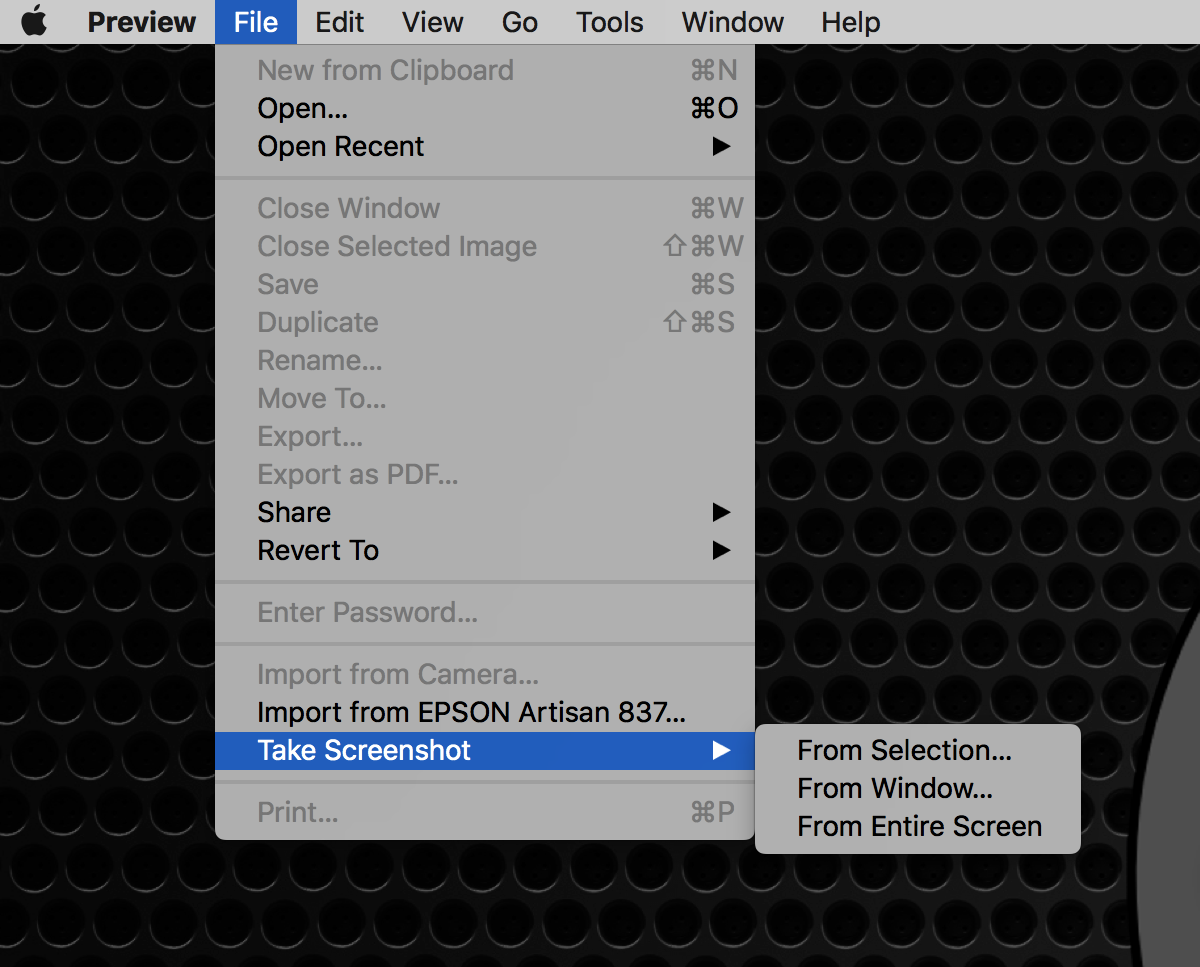 Once you have started Preview, on the first launch it may default to a file open dialog. No worries, just click done. Now, to do a screenshot, just go to the file menu and select “Take Screenshot”. You will notice that there are three choices – Selection, Window, and Entire Screen.

The “Selection” choice gives you a handy marker tool to use to define the area of the screen you want to capture. To use it, simply click and drag where you want to capture. After you release the mouse, the captured image will automatically open up in Preview for further editing or annotations.

The “Window” screenshot option in Preview will take a screenshot of the window currently under the mouse when you click or tap it. The current window will be shaded to show you which one will be captured, and you simply move the cursor to the one you want to capture. A quick click and you will find it open in Preview for further editing.

The “Entire Screen” screenshot option does exactly as it sounds – when you select it, the entire screen will be copied. But no worries, this option gives you a handy on-screen countdown so that you can prepare the screen just as you want before it snaps the picture.  Once the countdown has finished it will open up the new image in Preview, just like the others.

Using Preview to do your screenshots is really quite simple, and final editing of captured material is automatically set up for you as part of the process. But there are a couple things to keep in mind when doing so. The first is to get used to doing an alt-tab to switch over to Preview while you are at the keyboard instead of using the dock to launch it. This will prevent Preview from launching the file dialog each time, speeding up the process.

The next thing to note is that Preview has its limitations. For one, it involves the use of an app other than the one you are currently working in. This means additional keystrokes and possibly a disruption in your workflow.

Also, there are some things that Preview can’t capture. For example, the image above of the Preview Menu could not have been taken using preview itself. You may find other instances where things like this happen. At these times, just use the handy, built-in hotkey screenshots.

Every Mac ships with handy hotkey support for taking a screenshot, and after using a Mac for a while this is my preferred way of grabbing one. The screen combinations are easy to remember and are similar in result to using Preview above.

However, there is one difference – hotkey screenshots are saved to the desktop instead of immediately opening in Preview for editing. While at first, this may seem to be less convenient, the tradeoff in speed and workflow (you can stay in your current app while you grab a few more shots) more than makes up for it, in my ever so humble opinion.

You should hear the shutter sound (if your sound is on) and the image will be immediately saved to your desktop. Note that there is no countdown as there is with the Preview version, and for a good reason – without having Preview in the way, no window manipulation is required. You can just hit the key combination whenever you are ready for a screenshot. And if the key combination feels awkward at first, don’t worry – it some becomes second nature.

The next hotkey screenshot we want to mention is the Selected Area version. To do this one, simply press the “command”, “shift” and “4” keys at the same time (the only difference from the previous option is a “4” instead of a “3”). You should immediately see the marking cursor pop up on the screen, ready to mark an area of the screen.  Click and drag it to select the screen area you want, and once you release the mouse a new image will be quickly saved to your desktop. Your workflow won’t even notice that you took one.

As you can see, taking a screenshot on a Mac is a very simple process, thanks to the operating system’s built-in support.  And by giving multiple ways to take a screenshot to the user Apple is letting them decide which works best for their needs.

Personally I think that once you get used to the hotkey version you won’t bother with the app, but either way, works fine. I hope that you find taking screenshots on a Mac is as simple and convenient as I do. And if you need to zip up a few of those screenshots to send to someone or backup, check out our helpful article on File Zipping On A Mac.

nerdbeach.com
2017-11-08
Previous Post: What Could Be Causing Abdominal Chronic Pain?
Next Post: The Goose is Getting Fat, Shame Your Wallet Isn’t