By: Donna Chaffins
In: Causes, Movies 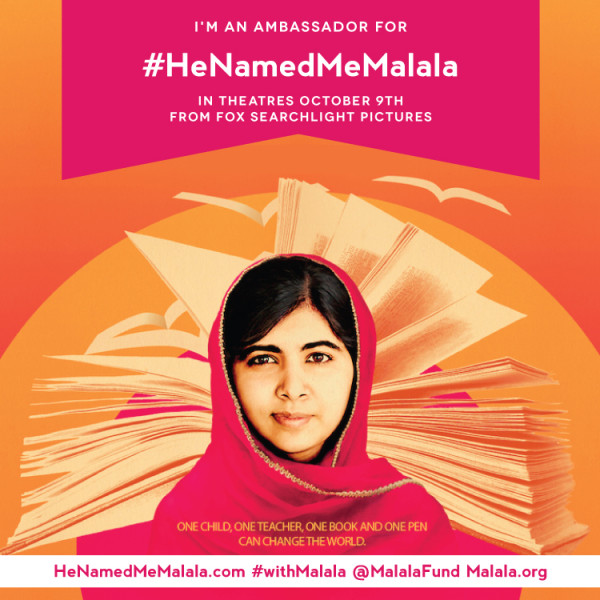 I had the great honor to be part of a conference call with Malala Yousafzai on Tuesday, along with some fellow bloggers. When I say, “great honor”, I sincerely mean it. Even though we could not see each other, just hearing her voice coming through my phone, left me awe-struck.

Malala is a soft spoken young lady, but her message is loud and clear. She is strong and brave and smart. She IS an inspiration. Yet at the same time, she is like so many other young women her age. She has brothers, who like most siblings get on her nerves at times. And I found it very interesting that at the age of 11, she wrote on a blog for the BBC.

I am humbled by Malala… at how she stood up and made a stand as a global youth advocate for education.

If you’ve never heard of Malala, here’s a little background:

Malala was born on 12 July 1997 in Mingora, a town in the Swat District of north-west Pakistan. Her father, Ziauddin Yousafzai named her after Malalai, a Pashtun heroine.

Ziauddin, who has always loved learning, ran a school in Swat adjacent to the family’s home. He was known as an advocate for education in Pakistan, which has the second highest number of out of school children in the world, and became an outspoken opponent of Taliban efforts to restrict education and stop girls from going to school.

Malala shared her father’s passion for learning and loved going to school. In 2009, as the Taliban’s military hold on Swat intensified, Malala began writing a blog for the BBC Urdu service under a pseudonym, about fears that her school would be attacked and the increasing military activity in Swat. Television and music were banned, women were prevented from going shopping and then Ziauddin was told that his school had to close.

The new documentary, He Named Me Malala opened recently in select theaters and several bloggers got to see an early viewing. Since it doesn’t open in a theater near me until October 9th, I’ll just have to wait. I’m excited about seeing it, though.

About He Named Me Malala:

HE NAMED ME MALALA is an intimate portrait of Malala Yousafzai, who was wounded when Taliban gunmen opened fire on her and her friends’ school bus in Pakistan’s Swat Valley.

The then 15-year-old teenager, who had been targeted for speaking out on behalf of girls’ education in her region of Swat Valley in Pakistan, was shot in the head, sparking international media outrage.  An educational activist in Pakistan, Yousafzai has since emerged as a leading campaigner for the rights of children worldwide and in December 2014, became the youngest-ever Nobel Peace Prize Laureate.

Watch the He Named Me Malala official trailer:

Find out when and where He Named Me Malala opens near you.

Malala and Ziauddin Yousafzai co-founded the Malala Fund, which empowers girls through education. Their goal is for every girls’ voice to be heard and that every girl has access to a quality secondary education.

It may have started with ONE voice, but if we all join in, it will be a much stronger and louder voice. A voice that cannot be denied. Will you let your voice be heard? Will you make a stand with Malala?

Learn more about the Malala Fund and what you can do to help.