Gavino’s Pizzeria Is A Hit With This Pizza Lover

By: Greg Chaffins
In: His Food and Drink

If you go looking in a certain small strip mall off Kingston Pike in Bearden, you will find a small pizzeria named Gavino’s Pizzeria. My wife and I did exactly that recently, and this was our first trip to the establishment. Being the pizza lover I am, I can’t believe I’m just now discovering this hidden gem. 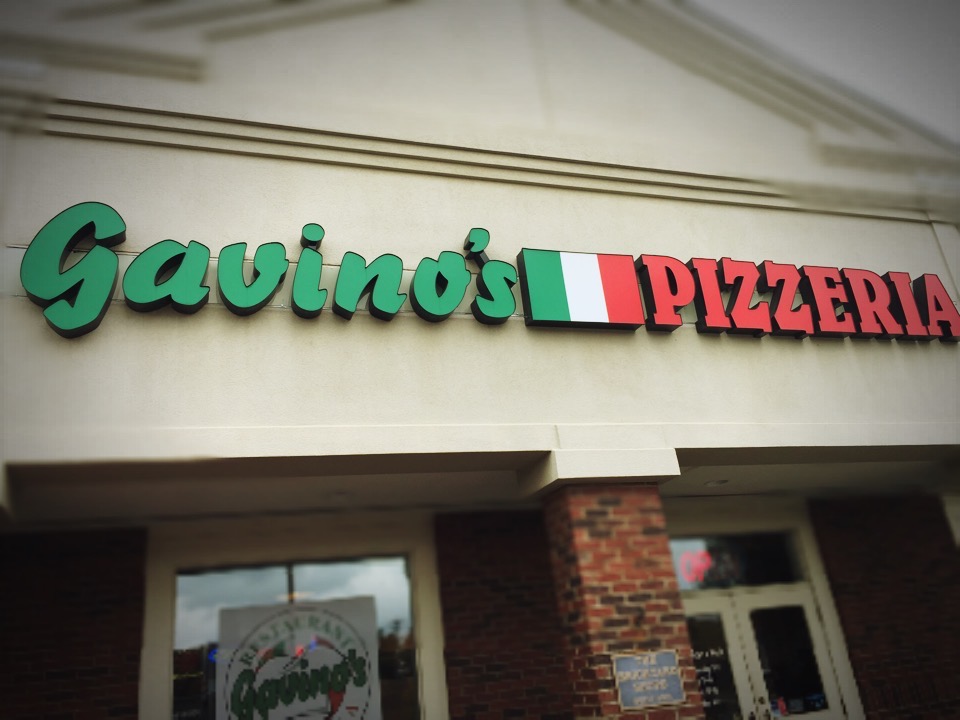 Once we walked inside, we were greeted by friendly staff and escorted to our table. On initial impressions, it seemed like this was just the kind of place you would want to go for family-friendly Italian food. And my suspicions were correct. You will find pictures on the walls and four TVs to no doubt entertain the guests during UT Home Football games.

The establishment was clean, and the tables were covered with the classic red and white checked tablecloths. There was classic rock and 80s music playing in the background, which I always find soothing. After studying our menus for a moment, we decided on our food and placed our order.

I got the whole Italian Hero Sub, and Donna got the half Italian Hero and a house salad. Since I was curious about their pizza as well I opted for a sample of that.

The pizzas at Gavino’s are mostly of three types – Neapolitan, Sicilian, and a curiously named Grandma’s Pizza. They all sounded great, but I decided to go with the classic round tomatoes sauce based Neapolitan. They sell pizza by the slice or whole, and since I had a whole sub coming I opted for only a slice. 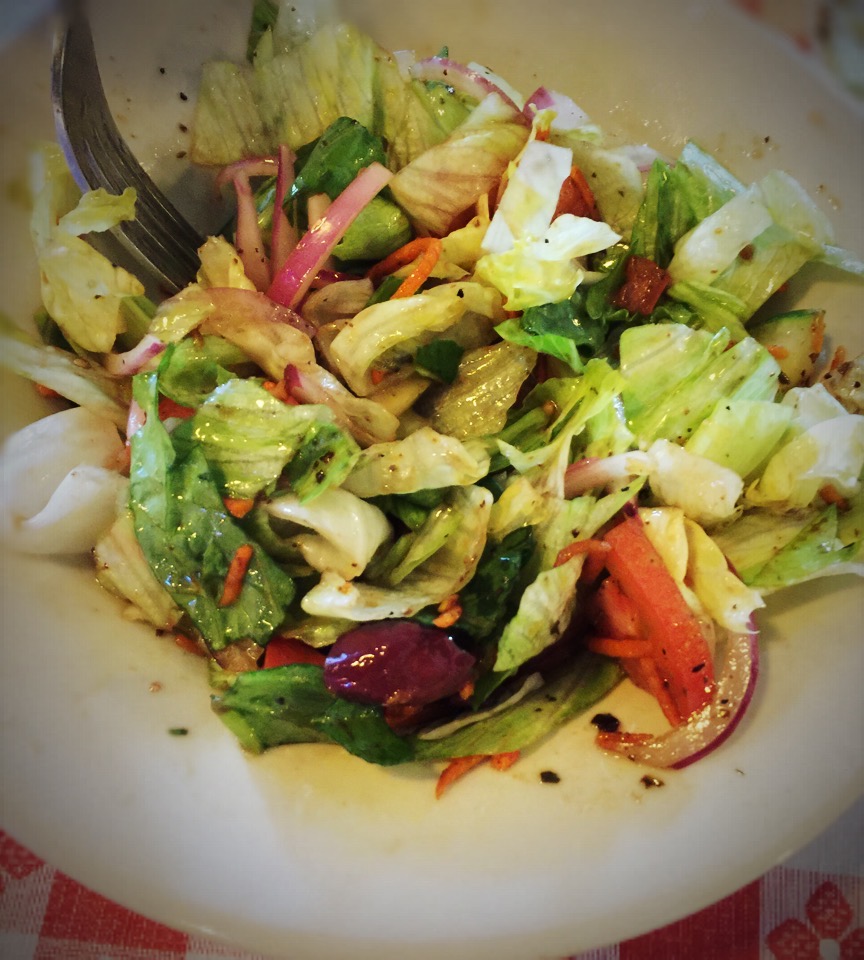 They brought out Donna’s salad a few moments later, and I have to say they are not stingy with their food. Everything was crisp and fresh, and the balsamic vinaigrette dressing looked to have been house made. Apparently, it was to Donna’s liking, and she lost no time digging in.

Now, by the size of the salad, I knew that the sandwich could be large, but that did not prepare me for the large open sandwich that was soon in front of me.

It was so full of vegetables that you could have eaten it with a fork as a salad, but being a sandwich lover and it being National Sandwich Day, that was not what I was there to do. So I folded the sandwich and took a bite, and I was pleasantly surprised. 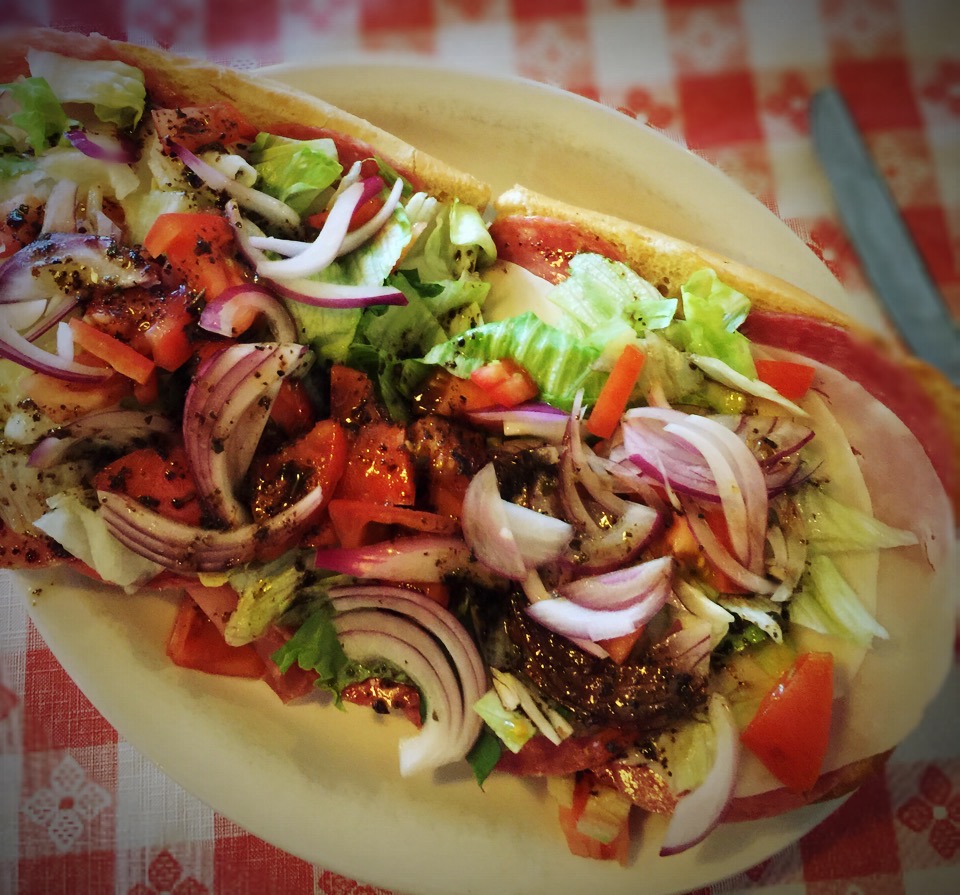 If I do have any criticism of the Gavino’s Italian Hero, it is that they had seemingly gotten carried away with the salad dressing. The sandwich was literally dripping with it, but after a couple of bites, I was convinced that this was how it should have been made. Besides, the sub roll was a hearty bread and not one bite seemed soggy.

The waitress, who was very attentive and nice to us while we were there, voluntarily produced extra napkins while stating that their subs could get messy. And boy was she was right.

I think I spent more time wiping off my phone from where I had taken a couple of pictures than I did myself, but it was all good. 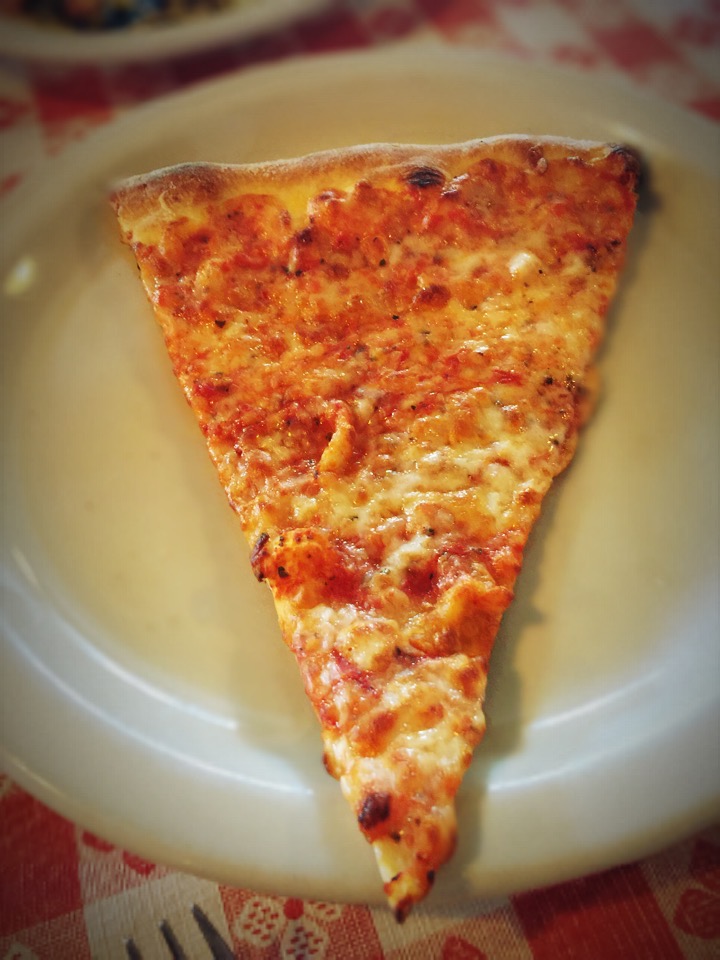 A few moments later the pizza arrived, and I found it to be exactly what I was expecting. It was a thin crust round pizza slice, and the pizza tasted like a classic pizza should taste, not unlike that which you would find in bigger cities. The pizza was gone quickly, and I doubted my wisdom in getting a whole sub and only a single slice of pizza.

I plan on going back there soon with my son, and we have got to try their Sicilian and Grandma’s Pizza types. If I understand correctly these are square pizzas so it might taste even more like the Italian fare from New York City and other such places. I am looking forward to it.