Funny Things Kids Say: How do you spell the “F” word?

By: Donna Chaffins
In: Family, Humor

We all know kids say the darnedest things. There’s been TV shows revolved around just that. I know my son has cracked me up more times than I can count. And usually it’s when he’s just being so matter-of-fact. He’s sixteen now and I still think he has an amazing sense of humor.

I do wish I had written down all the zingers he has come up with over the past fifteen years, but I will never forget two “funnies” in particular. I’d love to share them with you, and hope you enjoy them as much as we did.

By the way, he gets his sense of humor from me. 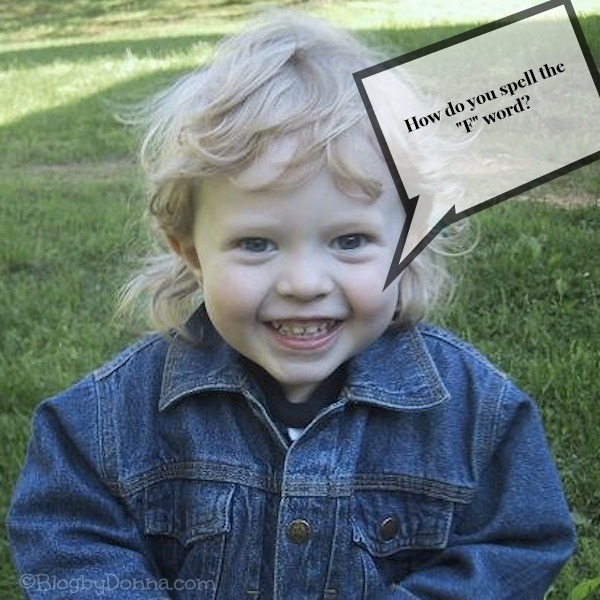 When Cody was about 3-years-old he came into the kitchen where his father and I were sitting and asked us a question.

My husband and I looked at each other, and I remember thinking O.M.G! how does he even know that word? So I stayed as calm as I could and said:

Yes, my son wanted to know how to spell vagina, which he thought was pronounced fa-gina. It took everything we had to not bust out laughing. I explained to him it was pronounced va-gina, told him to sound it out and spell it.  Which he did.

We had recently had a talk about his penis (which we usually refer to as his “Pee-Tom”. He asked me if that’s what it was really called, and I told him the correct term. He asked if I had a penis and I, of course, told him girls had vaginas.

So I guess he had been thinking about it. I really wish I had a video camera ready and recorded it, just to see the look on our faces when he asked us how to spell the “F” word. 🙂

When Cody was in the first grade I had to pick up 200+ rolls of toilet paper for a “build a snowman” project at his school.

So we stopped at the Dollar General Store (since the rolls of toilet paper would be stuffed into a tube sock, generic, cheap TP would do) to pick it up. I loaded the cart with the toilet paper and as we were in the check-out line, Cody whispers, “Mommy, they’re going to think we poop a lot.”

It caught me off guard and I did literally laugh out loud. Ha. He’s a regular little comedian.

And speaking of bathroom humor…

On a road trip to my parents house when my son was around four  we stopped at a Wendy’s to use the bathroom. The restroom only had one stall, so I took Cody into the stall with me and let him do his business. After he was finished I turned his back to me and I proceeded to do mine.

During this time someone else had entered the bathroom patiently waiting on us to finish.

Then out of the blue my son asks, “Mommy can I see your vagina”? Okay, it seems like my son had a thing about vaginas when he was younger, I know. And by this time he knew it was vagina and not fagina.

Once again the little booger caught me off guard.

I think I stuttered, “No”! And I could hear the lady waiting outside the stall let out a laugh.

When we finally exited the stall she had a huge smile on her face and I just said, “Kids”.

I’m so thankful my son is funny because it sure keeps me from killing him most days with his know-it-all teenager attitude.

I can listen to kids talk all day; because they’re bound to say something funny. I shared a story once about my nephew naming a pet spider, Yeast Infection… that one had me on the floor.