By: Donna Chaffins
In: Family and Health, In The News 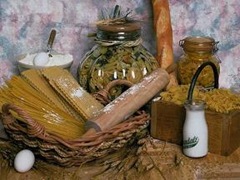 That is the question…Did the low-fat food fad make us fatter?  We may have eaten high-carb foods that weren't as satisfying and as a result we ate more.

According to an article in the Los Angeles Times "many people believe that they've gained weight on such (low fat) diets."  Because low-fat diets tend to be high carb diets.  So low-fat diets too often have a high glycemic load, according to the article.

It says that in one study, they "found that metabolism slowed down about twice as much for those on a low-fat diet compared with those on a diet with a low-glycemic load (meaning foods that are digested and absorbed slowly, producing only gradual rises — not rushes — in blood sugar and insulin)."  By contrast it says "those on the low-glycemic load diet also felt less hungry, perhaps because of fewer blood sugar crashes."  You can check out the article in its entirety here.

What is glycemic index?  According to Wikipedia, it is a measure of the effects of carbohydrates on blood glucose levels.  Carbohydrates that break down rapidly during digestion releasing glucose rapidly into the bloodstream have a high GI; carbohydrates that break down slowly, releasing glucose gradually into the bloodstream, have a low GI.  Check out Wikipedia to learn more about the glycemic index and how it works.

Generally speaking foods with a low GI are healthier and better for us.  The one thing that I really found of interest in the Los Angeles Times article was a statement made by Susan Roberts of Tufts University.  It says she thinks "low glycemic diets are a legitimate option for losing weight, but she doubts that high-glycemic load diets are a cause of the obesity epidemic."  "Just think about the 1950s.  Everyone was eating white bread, meatloaf (mad with white breadcrumbs), potatoes and rice — and were much thinner than today."

I can attest to this because growing up (I was born in 1964), I never ate whole wheat or whole grains; everything was white bread, flour, rice, potatoes, etc.  I never had a problem with my weight.  Well, I did but it was of being underweight.  I was a very small girl, I weighed a whopping 86 lbs when I graduated high school.

Fast forward, and I now eat whole grains, brown rice, sweet potatoes and low-fat foods;  I try to avoid white foods and high fat foods as much as possible.  However, I (without divulging my weight) could stand to lose 10 lbs.  I have also struggled with weight gain over the last 8 years or so.  Does this have anything to do with my weight gain today?  I don't know…I just know that I eat "healthier" foods today, yet have more weight (gain) issues today.

I think it's an interesting topic, that I am going to investigate further.  I will share with you my findings.  I would love to hear what you think on the issue of whether low fat foods make us fat.  Hope to hear from you!  Enjoy life!!!