When life has you down in the dumps, don’t flush it all away—just smile and think of one of these best plumbing jokes ever. (Okay, yes, that was corny but I promise the ones below are better!) 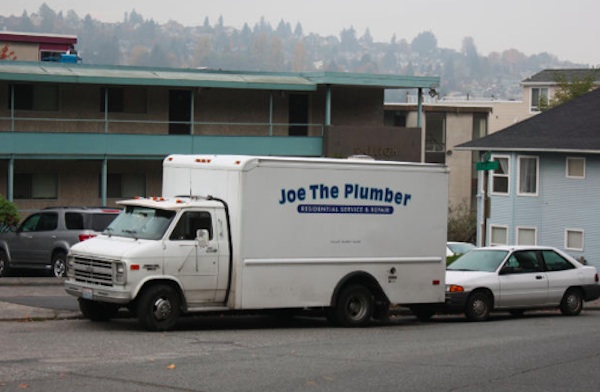 10. A good flush beats a full house every time!

9. Somebody broke into the police station and stole the only toilet in the building. Right now the cops are anxious to apprehend the perpetrator but they have nothing to go on.

8. A man at a train stop shows off pictures of his three sons to a friend. “What do your boys do for a living?” asked the man. “Well my youngest is a neurosurgeon and my middle is a lawyer,” he replied. “What does the oldest do?” the man asked. The father replied, “He’s the plumber that put them through school.”

7. A doctor had a backed up toilet and knocked on his neighbor’s door in the middle of the night. The neighbor, a plumber, complained that he was sleeping and it’s his day off, but the doctor replied, “I’m always on call!” The plumber wearily got dressed, went over to the doc’s toilet, lifted the lid, tossed in two aspirins and said, “If it’s still like this in the morning, give me a call.”

6. How many plumbers does it take to change a light bulb? None, that’s a union job.

5. A plumber was called to an upscale apartment in New York City to repair a leaking pipe. Upon arriving, he found that the woman was dressed provocatively and seemed to be hovering around him. After a while, the two became a little friendly and things got heated between them. At around 5 p.m., the phone rang and she hurried off to answer it, returning with the bad news that her husband was on his way home. She said, “Tonight is his bowling night, so why don’t you come back around 8 p.m. and we can finish this?” The plumber replied, “What, on my own time?”

4. A neighborhood cesspool was leaking, so Joey and his assistant Bobby come out to fix it. Joey dives into the filthy, stinky pool and comes out in a few seconds, covered head to toe in human excrement. “I’ll need a 5.5 wrench, Bobby” said the master plumber to his young assistant. Bobby handed him the wrench and the plumber dived into the mess once again. A few minutes later, the master plumber comes up gasping for air and chews Bobby out saying, “I asked for a 5.5, Bobby. You gave me a 6.5. Give me the right wrench this time.” Bobby goes into the truck and comes back out with a 7.5 and a 5.5, asking, “Which one is that, boss?” The master plumber, now fuming, yells, “It’s that one, Bobby. You know, you need to start paying attention or else you’re going to be the guy that passes me wrenches your whole life,” before diving back down into the filth.

3. The plumber was working in a house when the lady of the house said to him, “Would it be okay for me to take a bath while you’re eating lunch?” The plumber stopped working, sat on the toilet and replied, “It’s okay with me lady, as long as you don’t splash my sandwiches.”

2. Plumbers never get nervous. How do you know? Well, have you ever seen a plumber biting his nails?

1. A plumber took a job at a house with a large dog and a parrot. The owner, sensing the plumber’s nerves, told the man that the dog was fine, just don’t ever, ever talk to the parrot. Relieved, the plumber started working, the dog sitting there watching him the whole time. After about 20 minutes, the parrot unleashed the nastiest tirade of insults at the plumber who, after a few minutes of this, told the parrot to shut up. The parrot replied, “Sick ‘em, Rex!”

I told you these were the best plumbing jokes ever!

If you enjoy these I hope you will share them, especially if you have a plumber friend… although they’ve probably already heard all the best plumbing jokes ever! Looking for more plumber jokes or a fun gift idea for the plumber in your life? Check out The Best Ever Book of Plumber Jokes

If you click through one of these links and buy something, I’ll earn some money, so thank you.

blogbydonna.com
2013-04-19
Previous Post: Most Common Mistakes You Can Make While Photographing Babies
Next Post: How To Regroup, Rejoin and Rejoice After Divorce