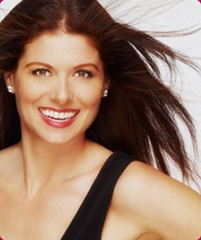 Debra Messing returns to the USA Network as Molly Kagan in the new original series, The Starter Wife, tonight, October 10, 2008.  After last summer's successful miniseries, Messing is back in the role of discarded Hollywood housewife Molly Kagan.

I have to admit I found The Starter Wife a guilty pleasure.  I so enjoyed the miniseries and at the time I said I hoped they turned it into a series.  So I'm excited to tune into the USA Network to watch tonight.  I hope they stay true to the miniseries and don't mess up a good thing.

If you are not familiar with The Starter Wife, here is an overview of the miniseries that aired last summer from  USANetwork.com,

If having it all in Hollywood means being married to an ambitious movie studio exec, having an adorable daughter, owning a flawlessly decorated McMansion in Brentwood, belonging to the most exclusive clubs and always getting the best table in the hottest restaurants, then Molly Kagan has it all.

Until she gets the one phone call that changes everything.

With that call, not only does Molly's husband Kenny inform her of his intentions to divorce just shy of their ten year anniversary (coincidentally before their pre-nup expires), but also he revokes her status as "Wife Of," instantly transforming her into a "Starter Wife",a decided step down, if not out, in the Hollywood pecking order.

Go to USANetwork.com to read the rest of the overview.  Here is an overview of this seasons show,

While the miniseries centered on the summer of Molly's divorce that forced her to start over, in these all-new episodes, Molly has moved into a home of her own with her seven-year-old daughter Jaden and is ready to navigate her new life as a single mom and define herself on her own terms. While facing the very real challenges of trying to begin a new career at forty-something, Molly is now also juggling the ongoing emotional and financial complications of her divorce from Kenny (David Alan Basche), who could use a remedial course in parenting; new love interests, despite recently having sworn off men; and raising a grounded daughter in a town that doesn't exactly have its priorities straight. With the help of her loyal friends Joan (Emmy winner Judy Davis) and Rodney (Chris Diamantopoulos), who are trying to figure it all out for themselves too, as well as her new Starting Gate School ally, Liz (Danielle Nicolet), Molly will discover how to forge a new life even when her past is always present.

I love Debra Messing in The Starter Wife, and I've been a fan of Messing since Will and Grace.  I also enjoy Judy Davis as Molly's friend Joan.  In fact, as much as I love the character Molly, I personally think Judy Davis makes the show.  Davis plays Joan brilliantly!  She won an Emmy for the role so I'm not the only one who thinks so.

At the USA Network web site you can play games like Whack an Ex, Go Go Yoga and much more.  There are videos, communities and sweepstakes to enter; you can find tons of fun things related to The Starter Wife to keep you entertained for hours.