The 10 Best Cliches for Cliché Day

By: Donna Chaffins
In: Fun, Holidays and Observances, Lists 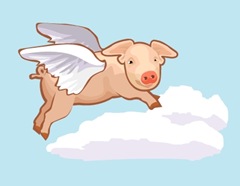 Did you know that today November 3, 2008, is Cliché Day?  Well, it is.  Cliche Day, observed Nov. 3rd, celebrates the art of using phrases to death. According to Wikipedia,

A cliché (from French, pronounced [klɪ’ʃe]) or cliche is a phrase, expression, or idea that has been overused to the point of losing its intended force or novelty, especially when at some time it was considered distinctively forceful or novel. The term is most likely to be used in a negative context. It is frequently used in modern culture to reference an action or idea that is expected or predictable based on a prior event.

We use or hear clichés all the time.  I think probably one of the most used cliches I hear is "when pigs fly"; what about you?  Take this cliche quiz and see if you know the origins of some of the most popular cliches.  By the way, I got them all correct.

Since today is Cliche Day I thought I would share with you my 10 favorite (and the ones I’m guilty of using) cliches:

Check out ClicheSite.com for a large list of cliches.  I would love to know what cliche you use the most.  So leave a comment and share it with us.  And be sure to use a cliche or two today in celebration of Cliche Day!