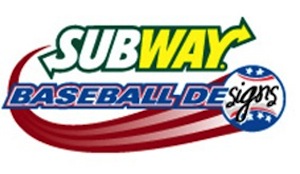 We probably eat out more at Subway than any other restaurant. It's definitely our "go to" restaurant. My hubby, my son, and I, each have our favorite subs. And my local Subway will even scoop out some of the bread for me, so it's even less calories and carbs. What's not to love about that? And if that wasn't enough…. Subway supports Little League Baseball.

The tour will visit four U.S. cities concluding with a final stop at the Little League® Baseball World Series (LLBWS) from Aug. 19-28, where the baseballs will then be auctioned off to the general public with all proceeds benefitting the Little League® Baseball Urban Initiative program which helps fund start-ups, developments, equipment, clinics and field maintenance for inner-city youth leagues and teams.

“The SUBWAY® Baseball DeSIGNS Tour and our national sponsorship of Little League® Baseball continue to provide an opportunity for SUBWAY® to support Little League® with a program that is unique and brings added awareness and exposure while giving back,” said Tony Pace SUBWAY® Franchisee Advertising Fund Chief Marketing Officer. “The level of creativity these young athletes and artists show in designing these baseballs is inspiring. We’re looking forward to kicking off the tour in Los Angeles and highlighting their talent across the country.”

“As the world’s leading youth sports organization for over 70 years, Little League® is focused on providing a community program that includes the opportunity to promote physical activity and a healthy lifestyle through participation,” said Stephen D. Keener, President and Chief Executive Officer of Little League® Baseball and Softball. “SUBWAY® continues to reach out and embrace the focus of the Little League Urban Initiative and its benefits to Leagues. We’re looking forward to this summer-long event and its culmination in August at the Little League Baseball World Series”

In addition to its introductory stop in Los Angeles and its final, 10-day stay in South Williamsport, Pa. at the Little League® Baseball World Series, the SUBWAY® Baseball DeSIGNS Tour will also visit Phoenix during baseball’s All-Star festivities in July and New York in early August.

For more information on the tour, consumers can visit SubwayKids.com and the Official SUBWAY® Facebook page. Online auctions for the celebrity-autographed baseballs will open to the public Aug. 19 and will run through the Little League® Baseball World Series, which concludes Aug. 28

SUBWAY® Restaurants have proudly sponsored Little League® Baseball and Softball since 2005 as a way to encourage Little Leaguers and their families to live active lifestyles and eat healthy.

Headquartered in Milford, Connecticut, and with regional offices in Amsterdam, Beirut, Brisbane, Miami and Singapore, the SUBWAY® chain was co-founded by Fred DeLuca and Dr. Peter Buck in 1965. Their partnership, which continues today, marked the beginning of a remarkable journey – one that has made it possible for thousands of individuals to build and succeed in their own business. In the 2010 Zagat® Fast Food Survey, the SUBWAY® brand was ranked "number one" by consumers in the "Most Popular," "Top Service" and "Healthy Options" categories for food brands with 5,000 or more locations. For more information about the SUBWAY® chain, visit www.SUBWAY®.com. Find us on Facebook: Facebook.com/SUBWAY®. Follow us on Twitter: twitter.com/SUBWAY®freshbuzz. SUBWAY® is a registered trademark of Doctor's Associates Inc.

Baseball and Softball is the world’s largest and most respected youth sports organization. With players in every U.S. state and more than 70 other countries, the program is led by more than 1 million adult volunteers. It serves children ages 5 through 18, including physically and mentally disabled children (Challenger Division) and children in urban areas (Little League Urban Initiative).

This is a sponsored post on behalf of Subway. All opinions expressed in this post are 100% mine.