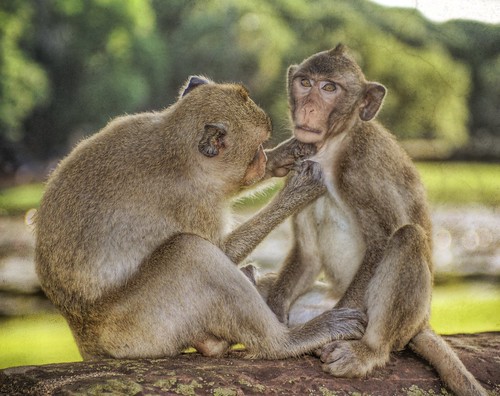 The human race is a unique species. We have egos and viewpoints and generally hold an interest in what other humans are doing. Of course some humans are more interesting than others and will undoubtedly attract more attention. We are an inquisitive and competitive bunch and tend to copy what each other does, even if we don’t care to admit it.

You only need to look at how young women tend to emulate what Rihanna or Beyonce might be wearing or how clueless teenage boys will grow ridiculous hairstyles over their faces with the belief that this might in some way turn them into the next talentless manufactured boy band.

Well this clip shows that you don’t have to be a dog to act like a dog. Petie the Macaw demonstrates his canine capabilities by attacking his owners face. Apparently he does this quite often as it’s one of his favorite games. The owner doesn’t seem too perturbed about it and as yet there doesn’t seem to be a need for a muzzle. Notice the absence of growling though.

Cats are known for their slyness. They also tend to be quite lazy and selfish and not particularly clean so it seems strange why anyone would want one as a pet. This clip also demonstrates their innate jealously of dogs as this cat is caught barking only to resort to meowing once it’s aware of human presence. The look of guilt on the moggy’s face is priceless as its fakeness and duplicity is plainly exposed to the world at large. Well at least YouTube anyway!

Well this canine has clearly let the side down by willfully acting like a cat. As it licks itself ‘clean’, it’s clear that there may be some envy amongst the two favorite household pets. A meow might be asking a bit too much as this dog has very little to say for itself. All it needs to do now is climb up on top of the kitchen work top which seems to be the norm in some households.

This horse is doing a great impression of a dog, albeit a very big dog. Horses are considered as reasonably intelligent creatures which makes it all the more strange why any thoroughbred would find it amusing to roll around on their backs for no real reason. It would of course be amusing to watch the same horse going to fetch a stick but even funnier when it’s running back at you in an over excited state!

So alas that ends our run down of animals impersonating each other. I’m sure Darwin would have had a lot to say about that.

This article was contributed by the Invisible Fence® Brand, specialist in invisible fence® systems.

blogbydonna.com
2013-02-25
Previous Post: 7 Family Days Out With An Educational Twist
Next Post: Capturing The Spirit Of Industry With Industrial Photography