Mommy Can I see Your… and Other Potty Humor #CloroxLounge

By: Donna Chaffins
In: Funny, Humor 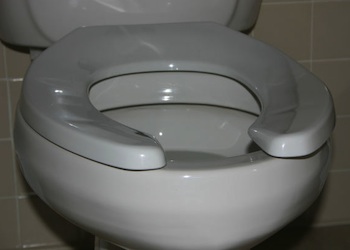 My bathroom is my haven. My private getaway. A place to relax in the tub with a good book or give myself a little mani/pedi. It's the only room in my home that I can have complete privacy. Now, it's my private oasis. But when my son was younger, even my bathroom wasn't sacred. As he got older and I locked the bathroom door, he would stand or sit outside the door talking to me. The bathroom is a popular place in most homes.

Well, The Clorox Lounge knows how important the bathroom is and think we moms (and dads) deserve a potty break, by giving us a… comedy break. The Clorox Lounge is a community designed to be mom’s gotta go place for comedy, that began on January 26, 2012. Hosted by comedian, actress and mom Sherri Shepherd, TheCloroxLounge.com features hilarious anecdotes, fun contests, great giveaways, coupons, and just the right amount of comic relief.

And in that vein, The Clorox Lounge wants to know, "What's the funniest thing your kid has ever done in the bathroom?"

If you have kids, you have undoubtedly experienced some form of hilarity (and embarrassment) involving your children and the bathroom. It's inevitable. A rite of passage to being a parent. Especially if you have a boy. Boys love potty jokes. And something about bodily functions just cracks them up. Seriously. Just say the word "fart" to a nine year old boy, and you'll see what I mean.

So, it's easy for me to come up with funny things my son has done or said in the bathroom. In fact, I'll share two things.

First, when my son was about two-years old, he was in the tub, and I was getting a towel and some bubble bath out of the linen closet – the linen closet is in the bathroom. I was not two feet from the tub and had my eyes averted from him for mere seconds. Mere seconds, I tell ya. When I turned around, I saw several tiny brown things floating around him. Yep. He pooped in the tub. These little poop pellets were all around him.

Oh, the joy of motherhood! I can laugh about it now, though. And, the second thing, is not something he did, but something he said. It also wasn't in our bathroom, but a public restroom…

My son was about five and we were half way to my mother's house (a 4.5 hour drive), when we stopped for a potty break at a Wendy's. It was just the two of us, so he had to go in with me. I mean in the stall with me. Hey, someone could come in and take him. Anyway, here we were in the bathroom stall, I'm telling him to face the wall opposite me, so I can have a little privacy. During this time, I hear someone else come into the bathroom.

There's something about public restrooms that makes kids say and do everything in there power to embarrass you. As this was just one of those instances. Because my son, all of a sudden asks me, "Mommy, can I see your 'fagina'?"  He used to pronounce it with the "f" sound.The woman that had come into the bathroom started laughing hysterically. I don't blame her… it was funny. I still laugh about it.

The Clorox Lounge would love to hear your funny stories regarding the funniest things your kids have done in the bathroom. You can click the "like" button above and join in all the fun at the Ode To The Commode on Facebook.

The Clorox Lounge is hosting a Last Comic Sitting Competition & Sweepstakes, that started February 27, 2012.
Over the course of eight weeks, 10 of the funniest mom and dad comics
will go head-to-head in a stand-up throw-down for the chance to sit on
the throne and be crowned the Last Comic Sitting. Each week, they’ll
face a new challenge and based on consumer voting one will be
eliminated. The grand prize winner will receive $10,000. For four weeks,
you will have the opportunity to vote and narrow the comics down to the
top mom and top dad.

YOU also have an opportunity to win $10,000 in the Last Comic Sitting Sweepstakes. It's super easy, just visit The Clorox Lounge to
sign-up and you'll be automatically entered for a chance to win the top prize.
You can generate up to two additional entries each day, per day, by
logging in and commenting, until April 22, 2012. Fans can also enter for
a chance to win cool prize packs. Ten will be given each week, for
twelve weeks, until April 22, 2012. Cool, right?

So don't miss out on all the bathroom humor, fun, awesome prizes, and a chance to win $10,000. Oh, and these mom and dad comics are so funny. My favorite mom and dad are still in the competition. My fingers are crossed they win!

Disclosure: I wrote this blog post while participating in the SocialMoms and Clorox® blogging program, to earn My SocialMoms Rewards Points. The opinions and ideas expressed here are my own. To read more posts on this topic, click here.