By: Donna Chaffins
In: Fun, In The News, Web Sites 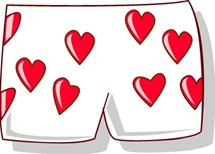 Underwear is no longer considered "unmentionable." With National Underwear Day, we focus the public's awareness on underwear for just one day in the spirit of grand celebration. Our 6th annual event has the makings of the best event to date with the most underwear brands for the runway shows…

The first and simplest form of underwear was the loincloth.  In warmer climates the loincloth was probably the only clothing worn.

Men are said to have worn loincloths in ancient Greece and Rome, though it is unclear whether Greek women wore undergarments. There is some speculation that only slaves wore loincloths and that citizens did not wear undergarments beneath their clothing.

The fabric used for loincloths may have been wool, linen or a linsey-woolsey blend.  I see why Greek women didn't wear them.  Can you imagine wearing wool panties?

So today for National Underwear Day…wear you best undies!