3 Confessions of a Christmas Nut

By: Donna Chaffins
In: Holidays and Observances, Humor

Okay, I’m going to ‘fess up: I’m a Christmas nut. I freely admit it.

Remember the hilarious antics of Clark Griswold in the movie Christmas Vacation? That’s me – at least to a degree.

In my own defense, I don’t do quite the amount of fumbling and bumbling that poor Clark endured: No spectacular pratfalls, no frantic, panicky freefall slides off an icy roof. Okay…maybe the occasional close call, but nothing so dramatic as old Clark – at least not yet! 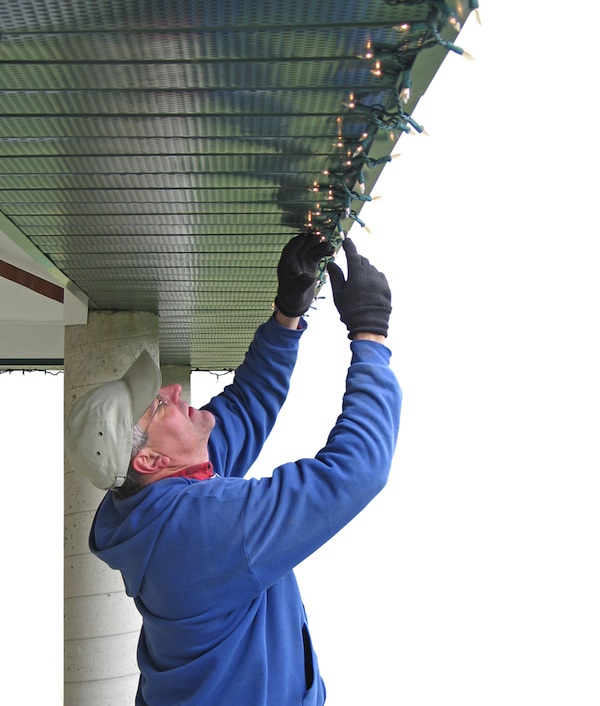 But the spirit of Christmas that drove Clark to such frenzied extremes of decorating debauchery? I have to confess: I’m right there with him. That same wonderful madness descends upon me every year.

And Clark and I certainly aren’t alone.

Confession of a Christmas Nut

There are millions of us. And I think that our ‘illness’ is a bit infectious, because our numbers seem to be growing every year. Americans spend billions of dollars on Christmas decorations every holiday season.

The amount we spend has been increasing annually, even through recent recession-ravaged years.

Many of us spend months planning the next year’s decorating designs. We spend hours poring through catalogs, searching out the latest and greatest in cool gizmos and technological breakthroughs. We lay out plans and chart designs.

And yes, sometimes we’re even driven a bit by a sense of friendly competition. During the Christmas season, I sometimes bundle the family into the car and launch out on intelligence-gathering missions (known to the rest of the family as a delightful sightseeing trip).

The purpose is to scout out the work of other Christmas nuts and look for tips and ideas that I can work into my own displays in future seasons.

So for Clark and me, and the millions of other members of the Christmas Nut Club, there’s a lot invested each year. Lots of time, lots of money, and lots of passion.

What Drives Our Nuttiness?

What is it that drives us to such extremes? Why do we invest so much of ourselves in this annual activity?

For me, at least, that’s a very simple question to answer. I do it for the same reasons Clark Griswold did it.

In the movie, there’s a scene where the entire family is gathered outside to witness the debut of Clark’s Christmas display. His wife is there. His kids are there, and his parents are there. Even his bah-humbug parents-in-law are there.

Finally, after a comical series of mishaps, Clark throws the switch that powers his display, and the night is set aglow with the result of all of his many hours of hard work.

And there it is, the motivation behind Clark’s nuttiness, displayed on the face of each member of his family: delight, awe, joy, and love. That’s the reason.

It’s the sparkle in the eyes of my kids as they view my handiwork with squeals of delight and wonder. It’s the smiles of my neighbors as they linger a bit, taking a brief pause from their fast-paced lives to enjoy the view. It’s the car that slows momentarily as it drives by, my handiwork adding a random moment of delight to the life of some stranger that I’ve never even met.

It’s all those moments that make being a Christmas nut an absolutely delightful experience.

Now I’ll admit, there are times when I do feel like a bit of a nut. Sometimes I’ll pause in the midst of the planning, or the spending, or the installing, and think, “Why in the world am I doing all of this?”

But on such occasions, precious memories from the past offer a delightful response to the question, and I proceed happily onward.

I know that there are some who might consider me to be a bit of a nut. That’s okay. Because I know that my ‘nuttiness’ has added lots of joy to my life, and to the lives of many others.

And I think that we could use a lot more of that particular brand of nuttiness in this world.

Jason Woodward is the Director of eCommerce for ChristmasDesigners.com, a leading supplier of LED Christmas lights and decoration products. Christmas Designers caters to all Christmas enthusiasts, including private homeowners and professional installation contractors.